Stage 2 of the 2017 Absa Cape Epic has been shortened to 62km and will finish in Caledon after leaving Hermanus.

The stage had been scheduled to be 102km and finish in Greyton but race medics warned that a combination of heat and humidity on Tuesday could endanger the health of riders.
“This is a big decision for us and we have never done it before in 14 years of staging the race, but the safety of our riders is paramount,” said Absa Cape Epic CEO Lynn Naudé.

The first two days of the race – a Prologue near Durbanville and Stage 1 in and around Hermanus – have been marked by temperatures peaking at 40ºC and extremely dry conditions. Several riders have suffered from heat-related ailments.
It is expected to be extremely hot again on Tuesday with increased humidity.

The 62km will include about 1 500m of vertical gain, down from 2 350m on the original route. The finish will take place at Caledon Botanical Gardens.
“We made the call after extensive discussions with the medical team and key stakeholders,” said Naudé. “We considered various options but decided this was the fairest and safest option.”

Stage 3 will start as scheduled in Greyton on Wednesday and the race organisers were early today busy organising shuttles to get bikes and riders from Caledon to Greyton.
“We’ve been up through the night making plans to organise the finishline logistics and have this run as smoothly as possible, but we ask all stakeholders to be patient,” said Naudé. “Barring any unforeseen developments the rest of the race will be held as scheduled.”

Tuesday’s start will take place at the times originally scheduled.The maximum stage time will be adjusted and announced before the start.

Uncle Fish Swim On, While Others Flounder in the Muddy Baviaanskloof 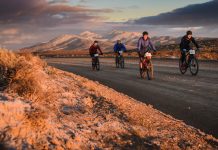 Muddy Fun in the Forests at the Glacier Storms River Traverse 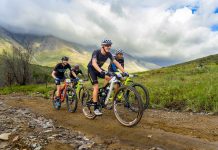 Entries open for SA’s ‘MTB Party of the Year’, the 2022 Savanna Origin of Trails 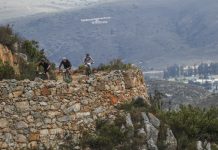 Communities, Commitment and the CCPP Group Lions Karoo to Coast

The race is on at the 2021 Fedhealth Magalies Monster MTB...